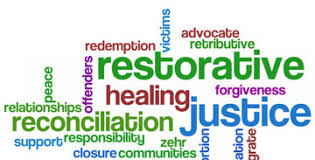 Historically, human justice systems have generally encompassed four main tenants of punishment: retribution, rehabilitation, deterrence, and incapacitation. Retribution refers to the idea of the punishment for a crime being proportionate to the harm caused by the offender. Rehabilitation, which is preventative in nature, supposes the offender requires some type of treatment or intervention to improve the mind and body. Ideally, deterrence uses punishment to dissuade potential offenders from choosing crime to begin with. Incapacitation refers to the possible permanent removal of an offender from society who is deemed too threatening.

It’s no secret. Crime results in offenders experiencing stigmatization. With crime, offenders often spend the rest of their lives with the stigma of being a criminal. In addition to experiencing this stigmatization, offenders are often then subject to other societal disadvantages (loss of the right to vote/difficulty finding gainful employment/constant stereotyping/etc.). If you work in a school, you may notice that this experience is not all that dissimilar to that of our students who exhibit behavioral issues. Our “problem kids/bad kids/behavior problems” (whatever you want to call them) are often stigmatized after exhibiting behavior problems in the classroom or in the school, and may be labeled as such. Considering that our self-identity is immensely impacted by how others view or label us, Lents and Kazemian (2017) state:

Individuals form their self-identity on the basis of how they perceive others to view them… Once individuals are marked by a deviant label (ex. Offender), this label reinforces their feeling of being an “outsider,” alienating them… The resulting loss of status weakens the desire to conform to social norms, and thus leads to further deviance… As the label reinforces the identity, the negative identity, in turn, reinforces deviance. (p. 15)

Thus, labels carry burdensome weight, and it would appear that these offenders who have been labeled, also feel alienated and are less motivated to even try to prevent future offenses or reintegrate back into society. The negative identity associated with the label is reinforced after an offender has been labeled and faces obstacles to reintegration.

When I think about this in the context of schools, I recall “restorative justice” practices. Though I’m not an expert in this area, I like to think that I employ aspects of restorative practices, such as encouraging the repair of harm caused by misbehavior, mediating cooperative and reflective practices and dialogue that lead to relationship rebuilding, and reintegration as I invite students back into the school community. I need and want them to be contributing members of our school society.

The focus of any justice system should be on that system’s positive effects, such as how well the system prevents “reoffending” or “recidivism.” Research has shown that systems that focus on retribution, deterrence, control, and incapacitation are highly ineffective at reducing reoffending. In fact, not only have fear-based interventions been ineffective at reducing recidivism, research has found that they may actually contribute to the problem. However, systems that capitalize on human beings’ innate desire to reintegrate into society and culture are more successful at reducing recidivism.

Knowing what we know about criminal justice systems, if we don’t work to reintegrate students after they’ve served consequences/done their time/whatever you want to call it, aren’t we just exacerbating the problem? If students remain stigmatized and see no point in reintegrating into the school society/culture, aren’t we perpetuating a system that does more harm than good?

Like/Comment/Share! I’d love to hear from you!